An Ode To A One Fine Man–Dolphy. The Comedy King of Philippine Movie

By Balut July 12, 2012
I remember laughing alone in front of the old TV,
watching black and white movie re-runs during the lazy afternoon after school.
I remember you…
as an actor who can portray gay roles in the most funny and effective way.
as “Jack” (n Jill), as “Facifica Falayfay”, as “Fefita Fofonggay”, as “Darna"
as a super hero, super agent, super playboy and lover, super poor, super rich
and the most super ordinary person.

"As I grew up watching "John en Marsha",  I thought it would be cool to have "Puruntong" as a surname.
You made us laugh even in your simplest punch lines.

As I grew older and idolized Kevin Costner, you stole the scene and became “Kevin Kosme”.
Once again, you created an unforgettable character.

I will remember you as a very famous person who supported politician friends but never run for any post.
The charismatic playboy but remains responsible with all of his kids.
So fortunate but never forgets the less fortunate.
So talented yet so simple, so successful yet so humble.

Thank you for all the laughter you brought us,
for the humor you shared to us
and the humility you unconsciously instilled in us.

Rest in peace… one fine man
the one and only Comedy King of the Philippine movies,
Rest in peace Mang Dolphy. 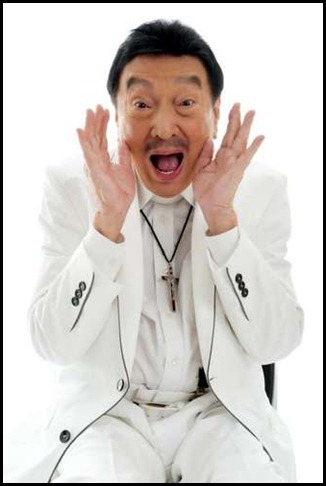