By Balut January 26, 2013
Today, January 26, 2013.  Iloilo is celebrating the climactic Sunday of the biggest festival in this city that is comparable to Cebu’s Sinulog - the Dinagyang Festival 2013.  Expect everyone to be in the streets and shouting Hala Bira!

Going back to the Monday that we were leaving Cebu, my heart was aching to stay longer and explore Cebu City.  If not for a business appointment that was waiting for us in Iloilo city, I was ready to miss that Monday morning flight and go on flight hunting once more.  But that was one important appointment that we can not afford to miss so off we go to Cebu International Airport with heavy hearts.

“Pit Senyor” was still playing in my ears and my foot is still hopping to the tune.  But as we step on familiar grounds at Sta. Barbara Airport, another festival air welcomed us.  It’s in the breeze, it’s all around us. 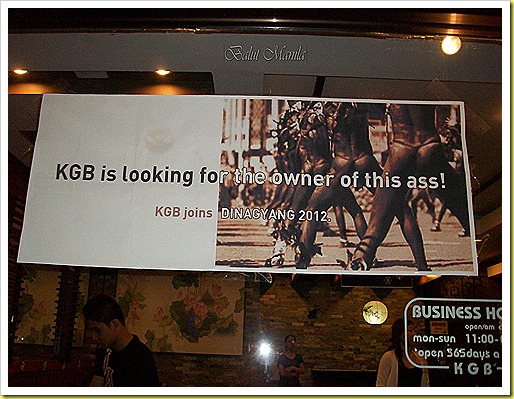 The photo is taken from one Korean restaurant in downtown Iloilo during the Kasadyahan Night.  KGB stands for “Korean Grill Barbeque”.  There was so much business competition during the Dinagyang festival.  Cheaper food “tiangge” were scattered all around the streets and it sort of became the major competitors versus the more established restaurants. I say the owner is so witty to post this signage on her Korean restaurant.  It did serve its purpose for whoever passed at this place is amused of the signage.  Some got curious and made them come in and check the place.  We are one among the curious and we got lucky to be served personally by the owner.  She cooked the super hot Korean noodles that we ordered right on our table.  Unfortunately, with some beers and so much going on during the day and night of the "Kasadyahan", I can’t remember any name of the Korean dish that we had.  what I do remember was that all of them tasted awesome and hot!

A series of posts under the category “When in Iloilo” will be published on this blog.  That is to share my awesome experiences in this beautiful city that I considered my third home.  I hope that the things that I will be sharing in my "When in Iloilo" posts will be helpful to those who wanted to explore this beautiful city.   Meanwhile you may want to join me as I reminisce my Dinagyang Festival experience.