By Balut February 04, 2013
Triple N!
What a coincidence that these sweet bloggers happen to be based in a country that starts with letter “N”!  They are the ones who I mentioned from my previous post Before January Ends Part 1: Foreign Currency Collection.

New Caledonia
It all started when King Archieviner of  Chateau De Archieviner posted that he is  sending post cards to fellow bloggers.   I am one among the lucky ones who received such honor from the King (wink*). 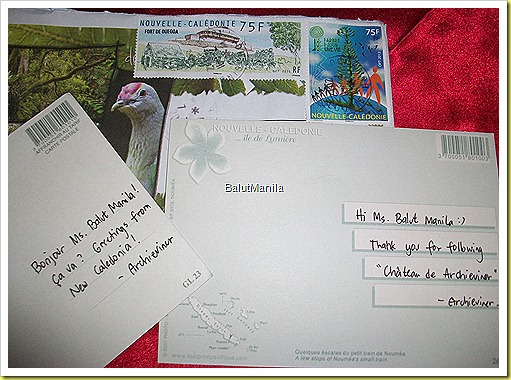 Front view of the two post cards.
One is a regular size post card and the other one is panoramic.  They are both awesome but I so love the panoramic one because
I LOVE FLOWERS!
(Clifford the Big Red Dog is mine. I made him sit on the envelope to cover my address lol) 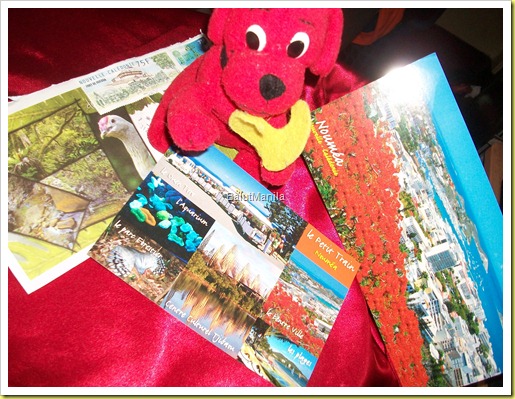 I apologize King A if I did not mention that I already received the post card.  I actually received this during the holidays but there’s a special reason why I did not post about this during that time.  It has something to do with the “Norway” portion of this post.

Again my sincere thanks.  I really love receiving postal mails so I really appreciate this  very much!

Norway
So the reason why I did not mention about my receipt of the post card from the kingdom of King Archieviner is because of a  fine lady from Norway - Joy of Joy's Notepad.  I know that she mailed a card for me so I was supposed to make a special post for the cards that will come from New Caledonia and Norway together.  Unfortunately, it seems that Joy’s card got lost in the mail.

It's the thought that counts Joy.  Even if I did not received the card I would like to say thank you for taking some time out of your busy life to mail me a card.  Thank you Joy!

Also!
Talking about Norway is like talking about another fine lady based in Norway.  She’s always been sweet and supportive with me and my blogs ever since we crossed paths in the blogosphere, Gracie of Gracie's Network!

Aside from being sweet, she's also thoughtful and reliable not only to me but with other blogger friends .  Fact to that is that she already granted the wish of our blogger friend Leah of Travel Quest about the paper bill collection.  But before I talk about that, let me share to you first what Gracie made for me while I was sick… 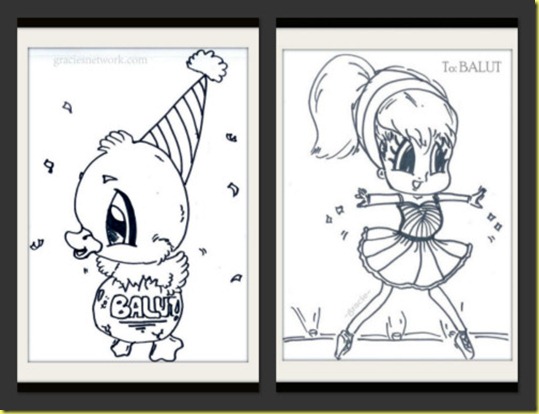 New York
Just like any New Yorker, Leah of Travel Quest is always busy.  But she never fails to visit our blogs whenever she can.  She also takes time to say hello and join our (kulitan) twitter convo.  It is is during one of those tweets that she mentioned about her paper bill collection.  She’s the main reason why I posted about my foreign currency collection.  My post is a bit delayed because I have yet to look from my (pack rat) things this collection of mine.

I consider this perfect timing because I am sending Thank You cards to these awesome friends as I’ve mentioned in my anniversary post.   So if they wish, I could include one each of paper bill from my collection (photo below).  I’m sure Leah will be very interested so I’ll give her the chance to be the first picker.  (I’m not sure if King A and Gracie is interested.  I saw them exchanging paper bills so I thought they might be lol). 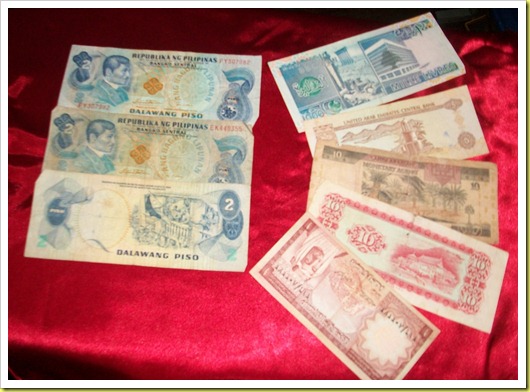 I apologize if I can not offer the rest from my collection.  I found that there’s a story behind each paper bill that I can not part with.  I offered the old Two Peso Bill because they are already rare and no longer in circulation.

For other readers from other countries who wish to exchange paper bills with me in exchange of the current Philippine Peso paper bills.  Just drop me a comment or a private message in my contact page.  Thanks and Happy collecting!