Music Exposure Part 1: When I Was Little 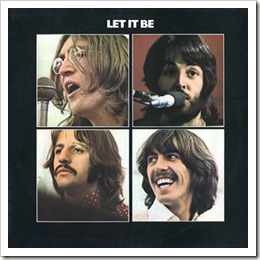 I have a generation gap with my older siblings, particularly with my oldest brother and sister (Kuya and Ate).  Being born the youngest from the brood of eight, my exposure in music is influenced by the different genre where my other siblings belong.

Let me start with, "When I was little" (lol but seriously), my father has this business of buying imported stuff from American people in Subic Base back in the days that it wasn’t yet a free port.  He used to bring home a lot of imported stuff, from food,  kitchen utensils, furniture to appliances.  We smell like Americans I tell yah. LOL!  Calling my father “Hey Jo!” up front was the ultimate dream joke for me and my siblings.  But it remained just a dream joke.  My father, in spite of being exposed to the western people is the typical conservative Filipino father.  He is super strict and disciplinarian.  Kissing his hand (Mano Po) was the “must do” when he comes home from work.

One day, my father brought home a stereo that made all of us exclaimed “Holy Cow!”  Everyone of us were agape while that “gorgeous huge piece of American technology” is being unloaded from the delivery van.  It was so sophisticated (during that time of course)   that I ‘m not sure if I can describe it perfectly in writing.  I also tried searching for an image from the net but I can’t find an exact one.  The photo below is a bit the same but ours is more sophisticated.  But at least it will give you an idea how it looks like.


an old American stereo.
Ours is more sophisticated, with piano finish top in varnish color and the edges are artfully curved. 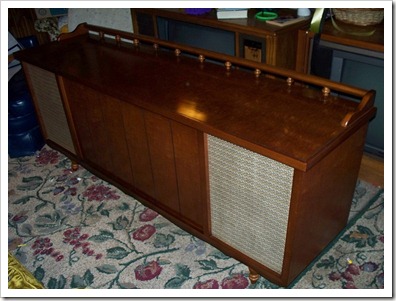 I don't think that even the richest people in our town own something like this.  It is the kind that you can only find from imported glossy magazines.  It has lots of features including two sliding door compartments.  One for the control panel and the other one for the record keeper. The records during that time is called “Long Playing Album” (LOL). Between the two compartments is a huge speaker that produces the best quality of  stereo sound.

There are lots more unique features this stereo has, but the one thing that really fascinates us and all the people who saw it, is the record player.  It is also the one thing that stuck in my mind and still fascinates me till this day.  The record player has a robot-like function.  It can hold up to ten long playing albums, and then it automatically queues the record one after the other.  Fascinating isn’t it? 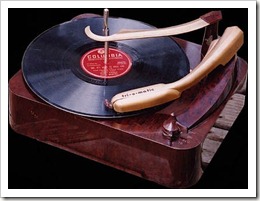 So my Kuya (brother) feasted on this sophisticated stereo.  As you know how the older siblings are in the family, they dominate or set the trend in the house! Yo! Ooops! It was “Peace Man” during that time.  My brother is one proud teener in the hippie genre, owning the coolest sound system in town!  His room was strategically adjacent to the living room where the stereo is displayed.  A mock-up divider separated the living room and my brother's head board.  He will queue a maximum of ten long playing albums to the stereo, go back to his room and sang his lungs out with the Beatles, Bee Gees, Elvis, The Doors, Santana, Black Sabbath, Cat Stevens, Jimi Hendrix, Bob Marley, Crosby Stills, Nash & Young and all the 70’s greatest.

Past forward to present...

The food - till this day I am not fond of eating those huge jarred pickles, canned goods, chocolate covered marshmallows and cookies and the likes.  I sort of developed a food fatigue on those food stuff.  To think that “PX” was still rare and a real big deal at that time.

The music - all I can say is that I can join the game "Name that Tune" and I promised you I could win the championship in the 70's category!

And this was just the beginning of my “no way out slavery" of listening to music.  Tag along with me as I go along with life saying “Rock on!”

Note from the author:
This is originally published from my former blog "The Lucky Blog" .

By Balut May 22, 2012
We all enjoyed my previous guessing game fun here even without prices at stake and I really thank you all for that!  You are all truly awesome.  Now it's time to move to another level of fun and this time there will be prices at stake!  Welcome to my first ever giveaway hosting, please join the fun and excitement! Summer or not we definitely need that daily eye protection.  I’m sure everyone is continuously looking for that comfortable, fashionable but affordable pair of sunglasses.  You need not look further because right here is your chance to win one perfect pair of sunglasses that you are looking for! The world’s most popular online eyeglass store, Firmoo.com together with my two blogs, Balut Manila and Run! and Keep on Running is giving away TEN (10) eyeglasses! Yep you read it right TEN it is! Before we go to the mechanic details let me give you a gist as to where your prices will be coming from.  My awesome sponsor, Firmoo.com is the emerging global online optic
80 comments
Read more