Argentina was dominating the game all through out (that’s how I saw the game) until the young substitute Mario Götze got lucky and broke the deadlock in the second half of the extra time in the 113th minute.  That goal secured Team Germany’s win for the coveted gold.  Well that’s the way I saw the game.  Of course fans of Germany sees and believes differently. 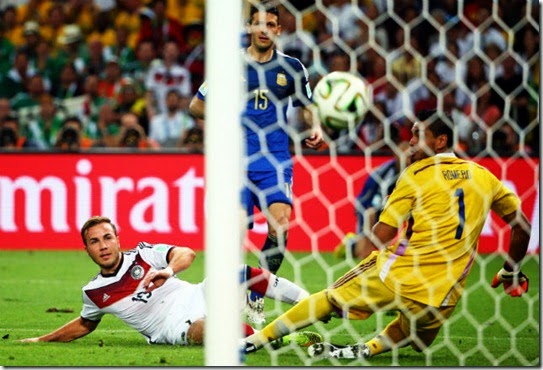 Now that the World Cup finals is over we could also go back to regular sleep schedule ha ha.  Filipino football fanatics like me and my family had been complaining for lack of sleeping specially those who needs to work after watching the game.  The games were being played live in Brazil and can be watched starting around 3:00 to 4:00AM Manila time.  Each game is played at 1:30 hours if without extension and penalty shoot out and more than two hours if extended which usually is the case when tough teams are competing.

In spite of the schedule, football fanatics still watched each game religiously.  Well we all know that the next World Cup is after four years – who would want to miss this opportunity?

Football fans are lucky today because there are many ways that we can watch the World Cup live.  Unlike some eight years ago when the internet is really not that “affordable” and “accessible” for the “masa” (common people like me) and cable subscription was too expensive.  Back then you can only watch the World Cup live via “Pay Per View”.  Aaaw!

I remember watching the 1994 (USA) World Cup finals between Brazil and Italy at the National Sports Grill in Greenbelt Makati where Brazil became the champion, the crowd at the sports grill was so overwhelming because they are not only Filipinos but foreigners who are real wild World Cup fanatics.  It’s a bit expensive way to watch the World Cup live then but the fun made the experienced worth it.

Then in 1998 (France)  World Cup Finals between France and Brazil, we watched it from an exclusive screening at Rockwell Power Plant Mall.  My hubby who was actively playing this sports back then and he was regularly invited to those exclusive screenings. It was also the “heyday” of Team Brazil.  I used to have the Brazilian flag painted on my face during those days.  Too bad I can’t find the photos with the face paint. I only found the other souvenir photos that were taken from polaroid ha ha.

If I remember it correct after those two World Cup matches we were able to watch the following finals at home.  Internet became not only affordable but with a better speed that enables to do live streaming if cable is not available.  Aah thanks to technology and competition, we are able to enjoy this great sport without worrying where to watch it.

And aah to those World Cup memories.  Too bad we only get to enjoy it every four years.  Looking forward to  #Russia2018!