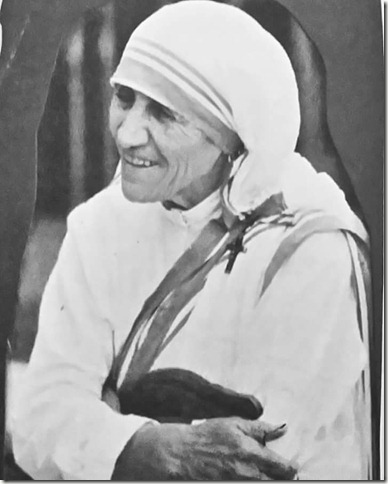 The photograph subject was from a pamphlet given to us along with some rosaries by the missionary nuns when we visited Missionaries of Charity Home of Joy for the Sick Children in Tondo, Manila, Philippines.

I took the photos earlier today as I woke up inspired by the news that Mother Teresa of Calcutta will be canonized.   Then I posted this at around 6:00 PM on a Sunday, 4th of September 2016 while watching CNN's current news that the noble Mother Teresa has just been named a SAINT!

She’s now Saint Teresa but I still prefer to call her my Mother Teresa.

Mother Teresa is known in the Catholic Church as Saint Teresa of Calcutta since her canonization today 4th September 2016. She was an Albanian Roman Catholic nun and missionary born Anjeze Gonxhe Bojaxhiu on August 26 1920 and died on September 5, 1997.  She founded the Missionaries of Charity, a Roman Catholic religeous congregation which run homes for people dying of HIV/AIDS, leprosy and tuberculosis. Source: Wikipedia