Sunday Memories and Photographs: The Manila Cathedral And Everything Nice Around It

It's funny when I read from somewhere how people classify the current date under "BC" which stands for "Before Corona" so it would read like AD (Anno Domini) and BC (Before Christ).

Thinking back from the last time I really had an enjoyable wandering before the lock down was mandated, the classification seems valid though.  It gives you the feel that the last time you had the freedom to be out and wander was some hundred years back and not just some months ago.

More than 60 days into the lock down, we are all probably wondering when and where was the last time you had a nice wandering before the government-mandated lock down caused by the COVID19 pandemic forced us to stay put.

For me, it was a week before the declaration of the total lock down which was March 08, 2020 BC to be exact.  It was a very happy chance! A happy chance because we never planned to visit the place where we enjoyed our time.  It was a result of some unexpected changes from the original place that we're supposed to visit.

March 8 was the Sunday before my birthday. Days before that Sunday, I was following the activities of the  "Veggie Drop Off" because apart from craving from fresh strawberry and lettuces, I sincerely wanted to support the cause of the Veggie Dropped Off which is to support our Benguet farmers. By Saturday, I learned that they will be at the Rizal Park (Luneta) starting at 5:00AM. I dragged hubby to  Luneta and told him that it would just be a a quick buy since we still have to attend the Sunday mass. Unfortunately, when we arrived at Luneta, there were no more veggies. Apparently, the organizers had a last minute schedule change and the drop off happened in Quezon City.

Frustrated and not wanting to waste our prep time to be out that Sunday morning we drove to The Manila Cathedral since it is in the same traffic route. We're lucky to be there just before 9:00 AM and just in time to join the celebration of the Sunday mass. By this date there was already the warnings about the Corona virus so there was not a lop of people attending the mass or idling by the park.  It was so different from the previous days I was in the cathedral and the nearby Intramuros. 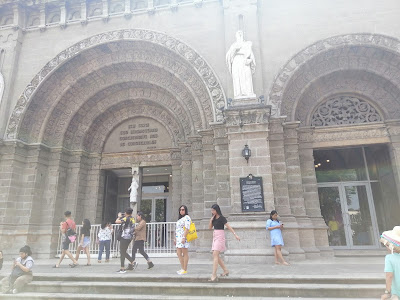 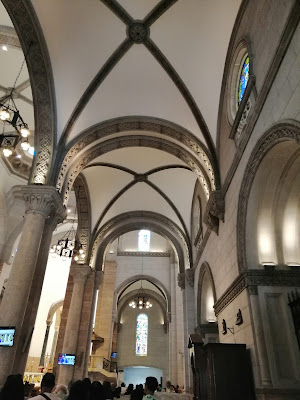 It was one of the most solemn mass I attended. I'm not sure if it was because the cathedral wasn't so crowded or that people the are in a melancholy mood anticipating the threat of the virus. When the mass was over we explored the place. I can no longer remember how many times I've been in this place but as always, it always gives me a unique awe just being there. I can never get used to the magic that this place can bring. The church, the park, the Walled City, they never fail to amaze me.  I  always have the the urge to stay and simply idle while appreciating the vicinity of this old-looking city.  The park and the public library in it has always been my favorite place to visit and to linger around.  Too bad though that the public library is temporarily close (empty). 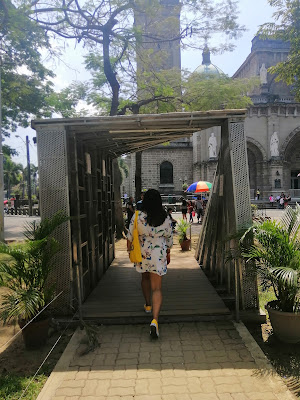 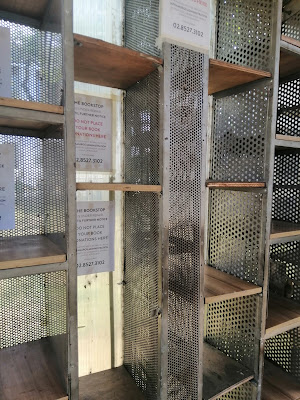 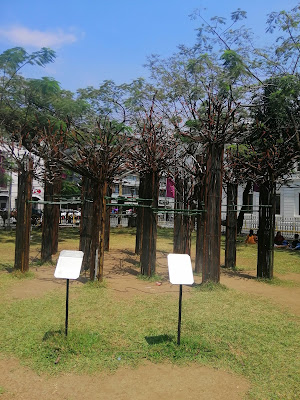 Nevertheless I was delighted to find that there was an on-going bazaar within the park fronting the cathedral. The bazaar was catering mostly to food and products from Baguio and Benguet.  My husband is a bit hesitant to stay because of the virus threat but, he also can't resist to join me when I sit down in one of the red-checkered-covered-table lined at the side of the park to have a taste of lots of deliciously-looking food they were selling. We had empanada, banana queue, some street foods and some fresh juices.  I think I ordered a piece of each of the food and I can't no longer remember all of them. What I can definitely remember is having to taste one of the the most appetizing fresh lumpia.   Apart from the  good food, the street vibe was just simply enjoyable.  You just sit there in one of those cute tables while enjoying the yummy food in street-vibes in front of the breathtakinly-looking cathedral just beside the park. I learned that it was the last day of the bazaar's. They were ordered to close down at the end of the day due to the impending announcement from the government about the COVID19. 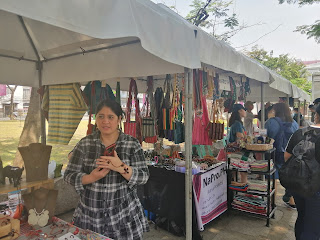 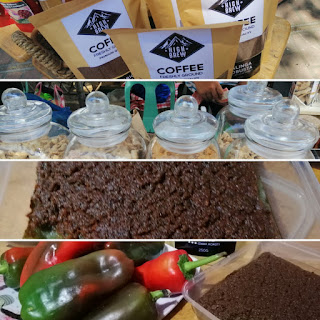 After that we go around the tiangge and I was lucky enough to buy some fresh bell pepper that the seller said were part of the vegie drop off from Luneta. I also got to buy Benguet coffee and the best sweet-tasting "kakanin".  While waiting for all the food intake to settle down, we roam around the park.  It was humid but there was also enough wind to balance the temperature and enjoy the park. Grabbing some poor-man's ice cream completed our Sunday park adventure! It had been years since I had one! 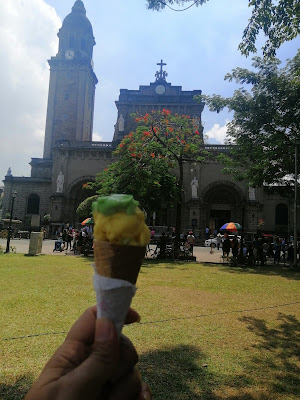 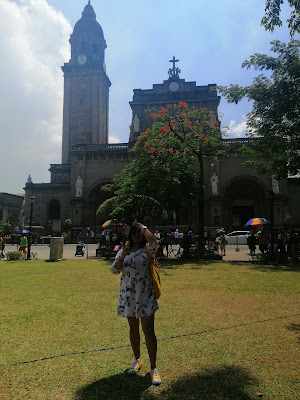 Earlier before heading out for Luneta, I never thought that I would have such an enjoyable day.  While at the park I told hubby that we should be back next Sunday and bring the kids.  I told myself that I wanted to celebrate the mass again here on my birthday which is the coming Sunday.

Sadly, that plan did not happen. For that Sunday, my birthday was also the same day that the country-wide lock down was declared.  Nobody is allowed to be out unless documented with a Quarantine Pass and for purpose of procuring basic needs only such as food and medicine.

It was maybe the reason why that Sunday was so enjoyable.  It was some sort of an omen.

The cathedral is located at Beaterio and Cabildo Streets in Intramuros, Manila.