Friday the 13th. Some Quick Facts 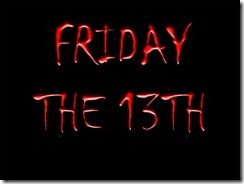 So here’s sharing some facts about Friday the 13th
So are you scared of Friday the 13th?  Why don’t you share your Friday the 13th experiences here?  It doesn’t need to be a bad and scary story.  Some really got lucky on this date

By Balut September 01, 2013
Happy 1st of September everyone! Today I started downloading my favorite collection of Christmas songs and add them back on my playlist.  I am playing the Ray Conniff selection while editing this post. Please don't be confused with the content/title of this post.  Today, 1st of September is technically 113 days more before Christmas . The following content is a re-post from my former blog "The Lucky Blog" originally titled as "95 Days Before Christmas"... ~ It kind of surprised me big time when I heard from today’s morning news that it is just 95 more days before Christmas!  I can’t help but utter the over used but oh so true phrase “time flies so fast”!  And it flies more faster when you are so caught up with the daily rushes of life that you missed to savor the moment when the most anticipated season of the year is fast approaching. For those who’s been following my blog posts, it is so obvious that for almost two months now, I am having one helluv
53 comments
Read more