By Balut October 22, 2013
Lately I am seeing a lot of horror and mystery movies being shown on cable channels one of which is the "Twilight" series.  Oh it's Halloween that's why!

Though I don't consider the "Twilight" movie series as a horror movies series.  For me it's more of a love story rather than horror.  Anyway let me share my personal review about  the last installment of the Twilight movie which I originally posted last November 2012 to my other blog "The Lucky Blog". 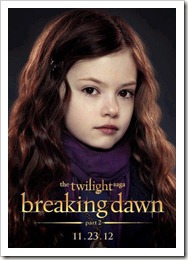 I’m glad Aro backed out or I’ll never forgive him for snapping the head of Carlisle Cullen – the vampire character I love most in this saga (next is Emmett).  I might ended up as a Volturi hunter.  Whoops! I’m definitely been carried by the vampire hype.

Ok before we go further, let me mention that I will not be using review scores here like 8 out of 10 or something like that.  My movie reviews will all be based on what goes on my (un)opinionated movie-lover brain and heart.  I’m not an expert in doing movie reviews but I’m giving myself the authority to make my own review simply because I like watching mixture of movies and analyzing them afterwards.  Consider it us my outspoken personal views.

Now, the problem with movies that are based on novels or books are, you can’t give them a perfect score if you are using one.  You will always have the tendency to compare them to the one you read right?  And it’s quite impossible to put every bit of details that we read from the book into a two-hour movie especially if it is a saga.  I’m sure everybody will agree that “bestseller” is an understatement for this Stephenie Meyer creation.

What I like most about the movie.
(Apart from Jacob Black’s abs) The fight scene!  It was magnificently cinematic! Vampires and wolves flying in acrobatic fights, head snapping then burnt whoa! that’s something new in the category called violence! lol.  However, the vampire’s unique abilities and defenses reminds me of the movie X-Men where each mutant possess a unique power.  So that point is not unique at all.

Michael Sheen’s (Aro) scene where he’s reading the mind of Ashley Greene (Alice) and knowing that he's going to be defeated by no other than the lover tandem of Edward and Bella was superb.  His backing out of the fight was entertainingly funny.  It got a lot of “I did not see that coming!” from the crowd.  Woot woot applause applause!

The image inserted here (Mackenzie Foy) is also my most like among the casts promotional photos.  Her face looks perfect for the role/name Renesmee.

What I like less about the movie.
(Apart from Kristen Stewart’s (no)acting) It has a very simple plot and it was drag down to an eternity of discussions and slow walks from the over dressed Volturi. I love the jackets of the Cullen clan by the way.  If in reality the vampire Alice is their fashion consultant, she really has a good taste.  Anyway going back to the simple plot.  The plot of this last installment could have been easily injected into the first movie or to simply say, it should have been just one movie for the last book.  The fans need not wait a year for this.  Their saga should have ended last year.  But for obvious reasons we all know why.

I say this last installment is especially made to make Twilight fanatics swoon and go home happy.  And if you’re somebody who haven't read the book or watch the first movie installments I strongly suggest not to watch this movie because you will just end up frustrated.  It’s a prerequisite to do so.  Just like Harry Potter you will not totally understand and appreciate the movie version unless you read the book.

So finally the saga has ended (did it really huh?). That future scene envisioned by Alice with the beautiful grown-up Renesmee and Jacob is such a good start for another “weirdos” love story (half human/half vampire ♥ half man/half dog) that I’m sure hopeless romantic fans will all be oh so willing to embrace.

Ok that’s kinda big spoiler for those who haven’t watched it yet. Lucky me! I viewed it on the first day it officially opened in Philippine cinemas - exclusive screening it is courtesy of Nuffnang.ph and Wacoal! Thanks guys!